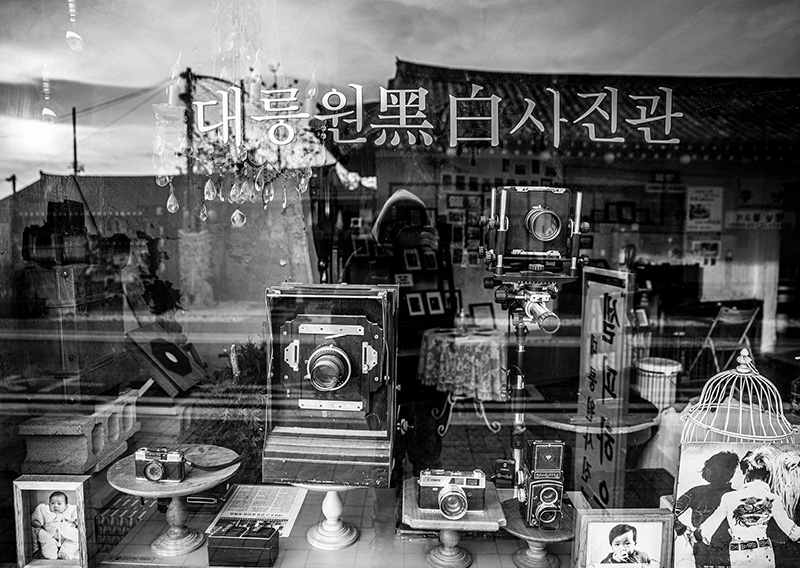 A Brief History of Photography and how the Camera has Shaped our World, from Ancient texts to the Digital Revolution…

On a recent trip to Gyeongju, South Korea, I was completely in awe after stumbling upon an antique camera shop. Seeing these vintage cameras and photographs helped remind me of my appreciation for film in my college days.  Inspired by the past and all things present, I chose to write an article about the one passion in my life that inspires me the most.

The art of photography has been around, circulating through society for generations. For some, it represents their profession. For others, it’s wrapped into glimpses of memories with friends and family in photo albums. The definition and representation of photography has evolved over the years. From mentions of light manipulation in ancient manuscripts to film photographs, here’s an insight into the history of photography.

4th Century: Inventions in the Dark

The history of photography likely began in ancient China, with the camera obscura. In Latin, the linguistic origin of the name, the apparatus translates to “dark room”. In ancient Chinese manuscripts, the writings describe the process of an image created in a “treasure house”; a pinhole collects light, and its rays intersect to form an inverted visual of the illuminated object/person.

The mention of this technique can be found in Greek philosopher Aristotle’s book, Problems – Book XV, as well Greek mathematician Euclid’s book, Optics, which referenced lines of light drawn directly from the eye as they pass through “a space of great extent” in the shape of our cone. Additionally, Byzantine-Greek mathematician and architect Anthemius of Tralles, shared his experience experimenting with the different features of the apparatus.

Around the dawn of the 16th century, Italian artist, scientist and inventor, Leonardo Da Vinci sketched out diagrams of the science behind the camera obscura in a notebook, which was later published in Codex Atlanticus. Throughout the next two centuries, artists, scientists, inventors, clerics, mathematicians and even cosmographers each described their interpretation of the apparatus and its impressive properties, linked to the biological functions of our eyes.

In 1694, the researcher Robert Hooke depicted a ‘convenient’ camera obscura in the Illustrious Society. The apparatus displayed consisted of a cone-shaped box which fit onto the head and shoulders of its user. By the 18th century, an even more accessible model featuring advancements by Robert Boyle and Robert Hooke were released to the public. This version of the camera was used by the likes of Paul Sandby and Joshua Reynolds, Louis Daguerre, William Fox Talbot, and Joseph Nicephore Niepce – the name we now associate with the first, real photograph.

In 1827, French inventor, Joseph Nicephore Niepce, produced a speckled visual of lights and shadows titled, “View from the Window at Le Gras.” Created through an eight-hour exposure process on a metal plate, known as daguerreotype, Niepce’s work is now known to be the earliest surviving (permanent) photograph.

Eventually, working with metal and glass plates posed its own set of inconveniences, particularly towards the fragile and unwieldy qualities of the photography plates. This ignited a search within the photography community for something more affordable, manageable, and what would yield more desirable results. Fortunately, the search resulted in the marriage of two technologies, silver halides and celluloid-based emulsions, which at the time, were still being refined.

A decade after Niepce’s photograph was created, the process he used was introduced to the masses, gaining the name we have used since – photography. Due to its unconventional blend between technology and art, the daguerreotype process transferred the photography industry from the world of developing science to the colorfully-creative realm of art. Despite the fragile nature of the process and the poor quality of the photographs, the resulting images were durable enough for be transport, viewing, and eventual storing. The seemingly-simple handling of the camera, like adjusting exposure properly, along with its affordability, made this an exciting development for the wider population.

On June 26th, 1848, on one of the four days of the June Days workers revolution which left several thousand dead and countless wounded in the streets of Paris, an amateur photographer from the Popincourt district captured the attack by General Lamoricière’s troops. Along with another image by the same photographer dated the day prior, “The Barricade in rue Saint-Maur-Popincourt” is regarded as the very first piece of photojournalism because it was the first photograph used to illustrate a newspaper story. Since then, raw representations of conflict and major events have been viewed by people from all over the world, allowing a new, visual insight into world affairs.

As the 80’s were fast-approaching, two men fell into a debate about whether a horse at full jog ever had all four hooves lift off the ground. Left bewildered by the hypotheses, English photographer Eadweard Muybridge decided to capture consecutive images of a horse at full jog. Muybridge’s plan consisted of a dozen cameras lined up with minimal spacing in between each other by a racing track, with strings extending from each camera towards the track in order to trigger the capturing screens as the horse galloped through. Not only did he prove that the all four of the horse’s hooves did leave the ground, but he discovered that if you were to flip through the images quick enough, it would appear as though the horse was actually in motion. This extraordinary discovery sparked the motion-picture movement.

Towards the end of the 19th century, American entrepreneur George Eastman of Rochester New York founded the Eastman Kodak Company, which for its development of making the photographic use of roll film mainstream, garnered fame as one of the greatest photographic companies in the world. The company took on multiple roles within the industry; manufacturing film, chemicals, cameras, darkroom hardware, projectors, and an assortment of tools and motion picture developments. However, its most admired quality was despite the KODAK being far from the best-functioning camera of the time, the idea of a simple box, screen, direct focal point, and a preloaded roll of film made it the most sought-after camera – fitting of the company’s slogan, “You Press the Button, We Do the Rest”.

As roll film continued developing into a standard ingredient of successful photography of the modern age, one format in particular gained popularity – the 135 format, also known as the 35mm. People’s fondness of the 35mm film propelled its transition from being used primarily for motion pictures to being modified into small cartridges intended for miniature still cameras.

However, despite its success, the motion picture cameras transported the 35mm film through the cameras only vertically, with an image frame of 18x24mm. To combat this issue, in 1913, Oskar Barnack, a German photographer and engineer at Leitz, a German manufacturer of office products, invented a prototype still camera that transported the film horizontally, instead capturing images with a 24x36mm image frame – the Leica. By 1925, this breakthrough invention became the image format of choice, which remains true for many digital camera users even today.

📸📸📸 Fun fact: The Kwanon (pronounced kannon) was a film camera released in 1934, named after the Buddhist bodhisattva of mercy, with the same name. Later the Kwanon camera became known as the “Hansa Canon”, becoming the first commercial camera of the company we know today as, you guessed it, Canon. 📸📸📸

The two-year period between 1957 and 1959 saw the release of major innovations in photography. In 1957, Asahi Optical of Japan launched the first member of the Pentax series, the world’s first eye-level viewing single-lens reflex camera with an instant return mirror. In 1959, Pentax introduced the professional-caliber 35mm SLR with an entire system of lenses, motor drives, and additional exciting accessories, the Nikon F.

Finally, photography took a turn and headed straight into the modern template, with digital photography climbing its way to the top of the podium. Photographers now had access to an array of formats, storage, display and transferring options to experiment with.

1975 was a pivotal year, as the first known digitally recorded images came to life in a Kodak lab. Although the camera’s functions were undemanding, the recording apparatus caused several aches; a predictable outcome considering the digital back weighed in at eight pounds.

From the late 80s through to the early 2000s, photography companies were in their prime. Fuji and Kodak collaborated with Canon and Nikon to produce digital cameras complementing the requirements of professionals and the rapidly-changing climate of the industry.

It is now 2021 and it is safe to say photography has come a long way. Today, we walk into camera stores and encounter an overwhelming quantity of choice – sizes, colors, functions, accessories. Additionally, photography is no longer bound to cameras, but has been incorporated into modern smartphone features as well. Easily accessible, professional-camera-quality features are stuffed into our pockets, ready for diverse use by diverse users. Images now travel the world instantaneously, telling stories, catering to aesthetics, capturing tragedy, triumph, and so much more.

What does photography represent in your life? Leave a comment below!

American artist Shea Winter Roggio is a documentary fine art photographer based in Philadelphia, PA, and the CEO of Winter Museo.  An alumni of both the University of the Arts and an Eddie Adams Workshop, Shea offers limited edition, fine art prints, all hand signed to art collectors worldwide on his art photography gallery shop.

3 thoughts on “History of Photography”